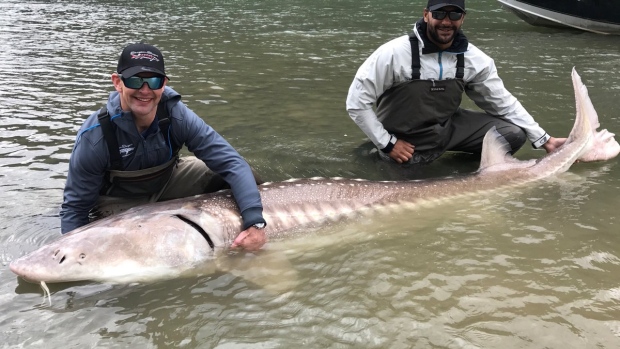 The Winnipeg Jets won their first game of the season on Monday night with a 4-2 victory over the Edmonton Oilers. They’re continuing their Western Canadian road trip, and will play the Vancouver Canucks on Thursday.

With two full days in in between games, the Jets had some time to kill, and chose to hang out in British Columbia’s biggest city. Earlier this summer, we featured Canucks defenceman Erik Gudbranson catching a humongous sturgeon in the Fraser River. “The Fraser” is the largest river in B.C. and stretches through the Rocky Mountains, spanning over 1,375 kilometres.

Dustin Byfuglien and Matt Hendricks, who are both out with undisclosed injuries, went out to the same river along with the Sturgeon Slayers, a luxury fishing company that takes its customers on fishing trips to remote locations.

Byfuglien and Hendricks caught a massive fish, which is fitting considering Byfuglien is one of the biggest players in the NHL. It’s illegal to keep sturgeon after they've been caught since they’re registered as a threatened, protected species. They’re nicknamed dinosaurs as they’ve survived two ice ages and have been around for over 65 million years, with some being measured at 12-feet and over 1000-lbs, with a life expectancy around 200 years.

Have a look at this mammoth-sized monsters, which easily towers over the one Gudbranson reeled in.

Byfuglien and Hendricks wern't the only hockey players out on a non-frozen water surface on Wednesday. After beating the Canucks in a shootout on Tuesday night, Dion Phaneuf and a few of his Senators teammates also took in the beautiful scenery of B.C. Their catch was just a wee bit smaller, though.