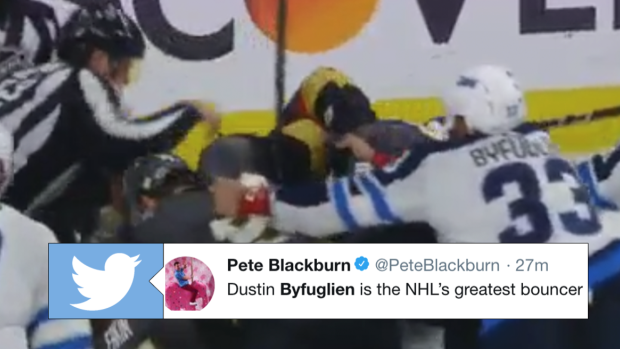 During the second round of the playoffs, Dustin Byfuglien showed of his unbelievable strength by rag-dolling two Predators players at once during a stoppage of play.

Wednesday night, Byfuglien was back at it again as he grabbed two Golden Knights players out of a scrum and brought the rest of the players in the scrum down while doing so.

There are facts that can't be disputed like the sun is hot or Byfuglien is the strongest player in the NHL and an absolute beast. That's just the way it is.

Dustin Byfuglien just simultaneously yanked Tomas Nosek and Colin Miller out of that scrum. It was so casual, like he was opening a door or something.

Dustin Byfuglien is hilarious and wonderful. I thought tying up two guys like that only happened in cartoons but he's done it against two teams now.

Dustin Byfuglien pulling bouncer action in these playoffs is something I haven’t seen since @johnscott_32 was at MTU. pic.twitter.com/tYXG8ngeiS