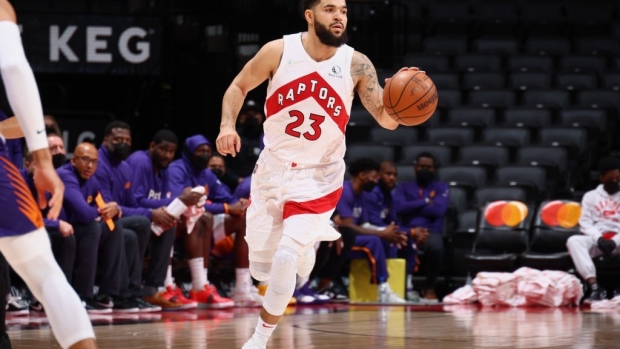 As the Toronto Raptors headed down to Detroit to take on the Pistons, former Raps head coach Dwane Casey had all of the praise for Fred VanVleet.

In his fourth season with the Pistons, Casey met with the media to talk about VanVleet’s success and incredible journey.

Dwane Casey: "When they build a statue of Kyle out there, the other statue will (eventually) be of Fred on the other side... They're like twins. He learned a lot from Kyle and he's reaping the benefits of it."

I asked Dwane Casey about what it was about @FredVanVleet ‘s character that revealed itself early on in his career back when Casey was the head coach in Toronto. Says he thinks both he and Kyle are going to get their statues : pic.twitter.com/VdbT9VJef8

Casey was with the Raptors back in 2016 when VanVleet first worked out with the team and saw the talent from the undrafted product out of Witchita State.

VanVleet’s 2021-2022 season is proving the former Raps head coach right as he’s currently in the best season thus far of his career.

Averaging a career-high 22.0 points, 6.6 assists and 4.9 rebounds, you better be calling him Freddy All-Star!

You absolutely love to see the love for VanVleet from Casey.