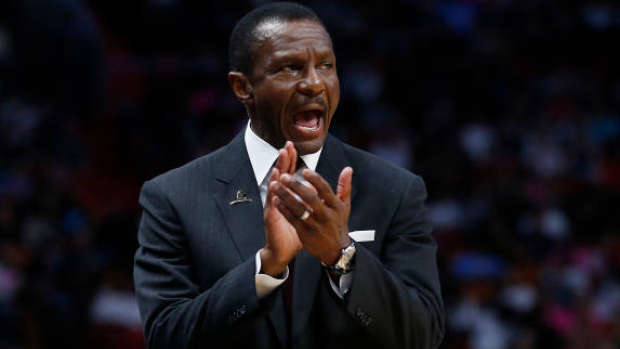 Dwane Casey has always been outspoken against racism, and it stems from his own experiences growing up in rural Kentucky. In the aftermath of George Floyd’s death, he released a powerful and personal message about racism.

Casey, who was previously a head coach with the Minnesota Timberwolves as well as the Toronto Raptors and currently the Detroit Pistons, connects a line from his own upbringing in rural Kentucky following desegregation to the injustices against Floyd, Ahmaud Arbery, Breonna Taylor and others.

Pistons coach Dwane Casey releases a powerful message. "The injustices continue to mount and nothing seems to be changing."

"...my son is now eight years old and I look at the world he is growing up in and wonder, how much has really changed?" Casey writes. "What have we really done in the last 54 years to make his eight-year-old world better than mine was?"

While Casey was one of the longtime Raptors mainstays that left the team prior to their championship year — joining DeMar DeRozan and Jonas Valanciunas, among others — he remains generally well-liked in Toronto, and his commitment to supporting the community off the court is one of the reasons why.

Just days ago, Casey partnered with a nonprofit in Detroit to provide food for senior and families with small childrens.

Great stuff from Dwane Casey and his family, who have teamed up with a nonprofit in Detroit to provide food for seniors and families with small children that are in need during these difficult times.

DC: "This is far more important than basketball." https://t.co/jQKJ3OMorJ