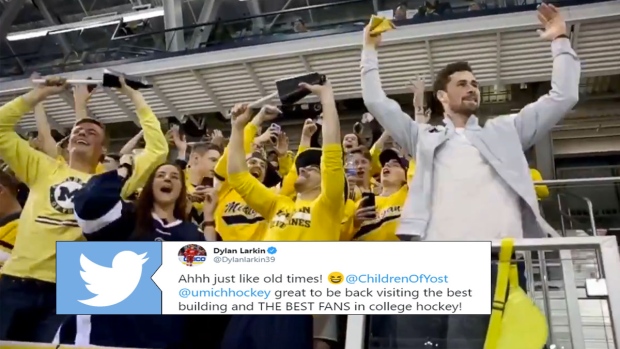 The Michigan Wolverines completed the sweep over the Michigan State Spartans in their Big Ten first-round series on Saturday night with their second straight 3-0 victory, and the Wolverines had a special guest in attendance cheering them on throughout the night.

In the middle of the third period, the Wolverines’ “Children of Yost” student cheering section noticed that Dylan Larkin, who played the 2014-15 season with the Wolverines, was at the game. Without wasting much time, a fan wrote “Dylan, Come Sit With Us.” on a grease board and it didn’t take long for Larkin join them after they showed the message on the videoboard.

It’s always a great atmosphere when the two schools go head-to-head in any sport, but it makes it that much better for the home crowd when a former player who’s now in the NHL shows up to cheer on his former team.

Ahhh just like old times! 😆@ChildrenOfYost @umichhockey great to be back visiting the best building and THE BEST FANS in college hockey! #GOBLUE https://t.co/FufrNf7TY6