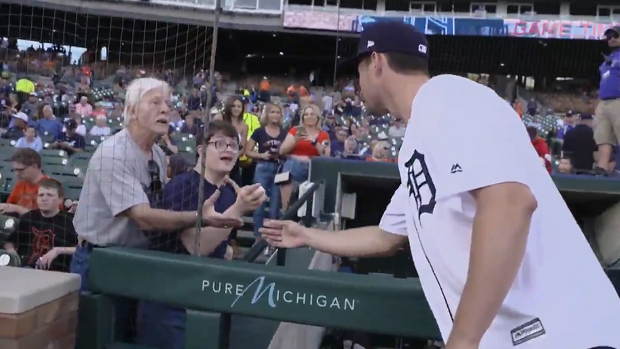 There’s nothing like a good showing of unity and togetherness among a city’s sports teams.

Luckily, at this time of the year, when the hockey guys are rolling into town for training camp just as the baseball teams are starting to gear up for fall ball, we sometimes get treated to a good mish-mash of hockey and baseball.

Last night, Detroit gave us just that, when the Tigers hosted the Red Wings for a night of hockey at the ballpark.

The Red Wings’ Dylan Larkin was the star of the show, and after he received some handy pointers, got to toss the ceremonial first pitch for the game.

All in a day’s work. pic.twitter.com/Ncy6Y6YXaH

Besides all the fun on the field, the teams had these sweet hats on hand, which beautifully integrate both the Tigers’ and the Red Wings’ iconic aesthetics.

RETWEET for your chance to win a hat with two of sport’s most iconic logos.

The teams also had replicas of both MLB and NHL league championship trophies on hand, and we’re not sure if that’s bad luck, but it was definitely a cool chance for fans.

We’re bringing out some hardware tonight. 👀

You can get your photo with both trophies tonight at Comerica Park! https://t.co/x4CY2izpWv pic.twitter.com/XBavfhP97T

Bad luck or not, it seemed like a great night to be a sports fan in Motor City.