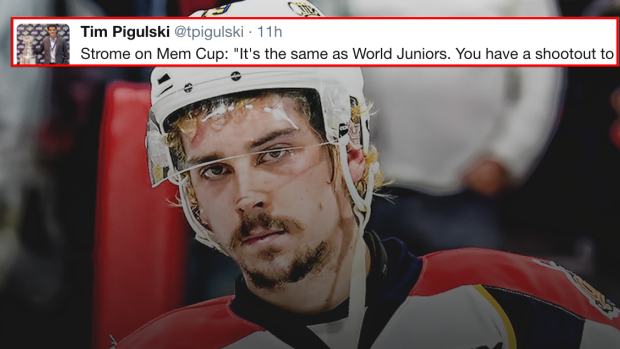 Sunday night, Dylan Strome and the OHL champion Erie Otters failed to finish their season on the highest of notes.

In the Memorial Cup final, Windsor edged Erie 4-3 in front of their home crowd to win their first Memorial Cup since 2010.

It's late. But we're on the job. Video coming. Shots like this. We're @MCMemorialCup champs! pic.twitter.com/IolO33odrW

Despite losing in the final, Strome was named Memorial Cup MVP for his incredible tournament.

The 20-year-old Strome led all scorers with seven goals and 11 points in five games to earn the MVP honours.

After the game, though, Strome compared the heartbreaking loss to the that of Canada's in the World Juniors to the United States earlier in the year.

Strome on Mem Cup: "It's the same as World Juniors. You have a shootout to decide a world champ. Here you have 3 league champs and a host."

Now, some fans may call Strome a sore loser and point out that Erie lost to Windsor twice in the tournament or that a host team hasn't won a championship since 2012, but the fact of the matter is he does bring up a good point.

All three league champions battled their way to a title and then had to quickly shift their focus to the Memorial Cup.

There was no time for resting for the Otters, Sea Dogs and Thunderbirds.  The Spitfires, on the other hand, were eliminated from the playoffs on April 4th, so they had a little more than a month to rest and heal.

That, plus having home ice advantage throughout the tournament are advantages no other team had.

For those that think Strome is just being salty or a sore loser, he's not.  He did gave credit to Windsor, but he's just criticizing the format.

Based on the replies I'm getting, I'll add that Strome did follow up by giving credit to Windsor. Didn't all fit in 140.

Although it ended in heartbreak, it was still an incredible run and Strome was appreciative of being apart of it.

Will never forget this year as long as I live. Proud is an understatement. Love you boys. #ErieForever