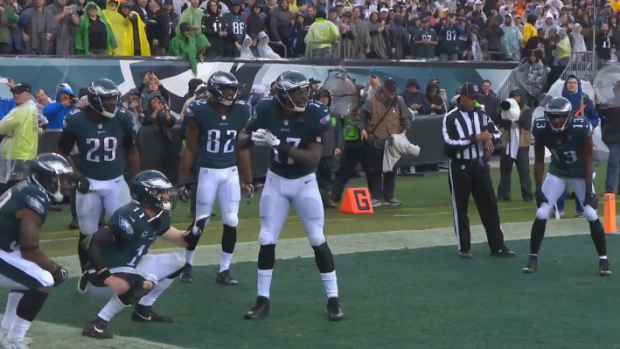 The NFL has given its fans some pretty creative and funny touchdown celebrations so far this season since the league announced that footballs can be used as props for celebration purposes as long as it’s in good nature and is not offensive.

The Philadelphia Eagles are one of the more innovate teams when it comes to red-zone cellys. Earlier this season, receivers Torrey Smith, Nelson Agholor and Alshon Jeffrey pretended they were baseball players in a awesome end-zone celebration.

In Week 8’s matchup against the 49ers, Jeffrey of the Eagles pulled in a touchdown, and the wide receiver got his teammates’ attention and squared up in a batter’s box as if he were a baseball player. Tight end Zach Ertz turned into a pitcher and pegged his teammate Jeffrey right in the knee. Jeffrey took exception to the heater from Ertz and opted to charge Ertz, who didn’t even both to square up and decided to just run away with a big grin on his face. The Eagles even had a catcher and umpire behind “home plate.”

In Ertz's defense, Alshon was crowding the plate. #FlyEaglesFly pic.twitter.com/ifrTMJxe8W

Angels outfielder Mike Trout was in attendance at Lincoln Financial Field for the game. Ertz  gave his touchdown ball to Trout after he scored. Ertz leads all tight ends in the league with six touchdowns this season. The Angles superstar outfield grew up in Vineland, New Jersey, which is much closer to Philly than New York’s MetLife Stadium.

Can't be long until Mike Trout requests the trade to Philly. pic.twitter.com/0WLnhU6DPu

Is Ertz trying to convince Trout to leave Los Angeles and come play for the Phillies? As with most superstar athletes, fans in and around the area of Trout's hometown have speculated that could one day make his way east to the city of brotherly love. Trout, 27, is a free agent at the conclusion of the 2020 season.

The Eagles trounced the 49ers 33-10, with Ertz and Jeffrey catching a combined two touchdowns on 96 yards. The Eagles improved to an NFL best 7-1 with the victory.

.@Eagles improve to 7-1 this season, best record in NFL and their best through 8 games since 2004, the last time they reached the Super Bowl pic.twitter.com/UC3a7Nzcb5