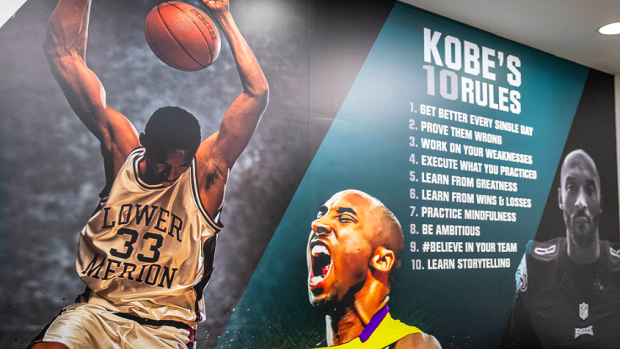 Kobe Bryant is one of the greatest basketball players and athletes of all-time, and he’s one of the most influential athletes to come out of Philadelphia.

Whenever anyone thought of Kobe they definitely though of Los Angeles and the Lakers, but the 5-time NBA champion was born in Philadelphia and was a big Philadelphia Eagles fan. During their Super Bowl run, Kobe showed the team and players continuous support over social media and through conversations, and now the team is honouring Kobe in a special way.

Last week, the Eagles revealed a wall in their practice facility dedicated to Kobe Bryant and it includes his 10 rules, as well as photos of him in high school, in the NBA, and in his Eagles gear.

1. Get better every single day

3. Work on your weaknesses

4. Execute what you practiced

9. Believe in your team

According to Eagles Vice President of Football Operations and Compliance Jon Ferrari, the Kobe Bryant tribute wall is something that several people wanted to happen and they wanted to make sure it was something that honoured Kobe and inspired the team at the same time.

"After the tragedy, the idea of the 'Kobe Wall' came about. We decided to freshen up some of the look in the building, around the locker room, around the weight room area. The outpouring of emotion from the guys on the team and with (cornerback) Darius Slay joining the team and picking jersey No. 24 as a tribute to Kobe because of what Kobe meant to him, the competitiveness that Kobe had was the kind of messaging that we'd like to have around the building, so it was really Coach and Howie's idea to develop that wall.

"We came up with different concepts and different versions of it and then it sat dormant for a little bit as we went through the pandemic and we were out of the building. As we got closer, we wanted to move forward and get everything done. Jeffrey (Lurie), Coach, Don (Smolenski), Howie – everybody signed off on it, thought it looked great, thought it sent the right message to the players, and we think it looks great."

The mural is right outside the Eagles’ locker room at their practice facility, so they see it every time they head out to the field and return from it.