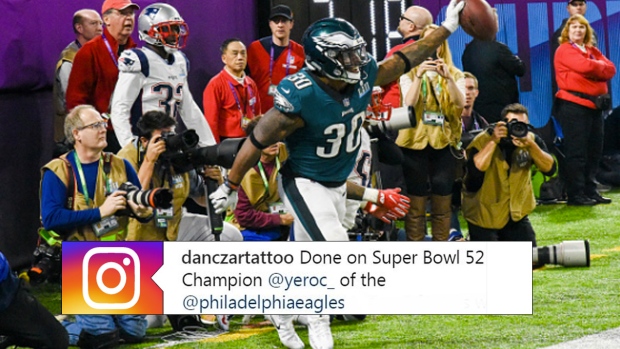 Corey Clement joined the Philadelphia Eagles prior to the 2017 NFL season as an undrafted free agent and he ended up playing a huge role for the team down the road.

The 23-year-old saw quite a bit of action throughout the year despite being a rookie in a crowded backfield, but his biggest performance of his career came on the night of Super Bowl LII.

The former Wisconsin Badger finished with four receptions for 100 yards and a touchdown in the Eagles' Super Bowl victory, so he went ahead and added some ink to his body to remember the moment forever.

On Monday, the Eagles running back got a tattoo of an eagle on his forearm and it’s pretty massive.

Done on Super Bowl 52 Champion @yeroc_ of the @philadelphiaeagles 🦅 Tag 2 friends who love the Birds!

That wasn’t the only Super Bowl related tattoo Clement had done this week. He also had a smaller one done behind his ear.

Clement’s latest ink was done by Dan Czar of AC Ink in Somers Point, New Jersey, and both were very well done.

The Glassboro, New Jersey native finished his rookie campaign with 321 rushing yards and four touchdowns on 74 attempts and also added 10 receptions for 123 yards and two touchdowns.