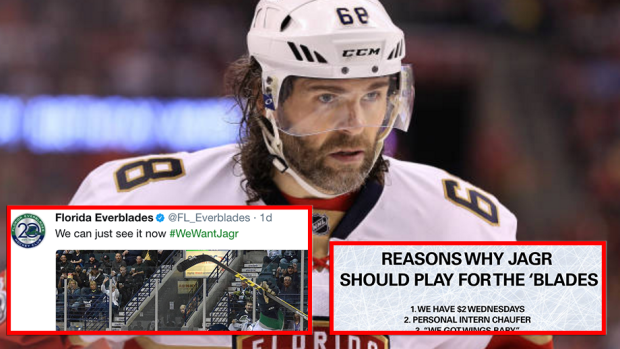 Another day has nearly come and gone and Jaromir Jagr still remains a free agent.

There's something so wrong with that sentence, especially when you consider the fact that Jagr recorded 46 points in 82 games last season with Florida and was actually a +2 on the year.

We imagine teams have been calling Jagr, but at this point he hasn't agreed to a deal with any teams, including the Florida Everblades of the ECHL.

🚨 The Everblades invite NHL great Jaromir Jagr to play for the 'Blades next season! #WeWantJagr

Only July 10th, the Everblades made an amazing pitch to try and land Jagr, but he hasn't responded.

That hasn't stopped the team from continuing their pursuit of the future Hall of Famer, though.

Jagr looks pretty good in an Everblades jersey.  If you want to see what the green one would look like with his name on it, don't worry, the team's got you covered.

Morning 'Blades fans! Still no call from Jagr. Our friends over at Exclusive Pro Sports put this together to help entice him! #WeWantJagr pic.twitter.com/lZ6GpmJ4y0

Until Jagr gets signed, expect the Everblades to keep trying to land him, and if he somehow doesn't get signed, maybe he'll actually end up staying in Florida.

🚨 UPDATE: Still haven't heard from @68Jagr. So here's a reminder of why he should play here! pic.twitter.com/KYzFS5glwf