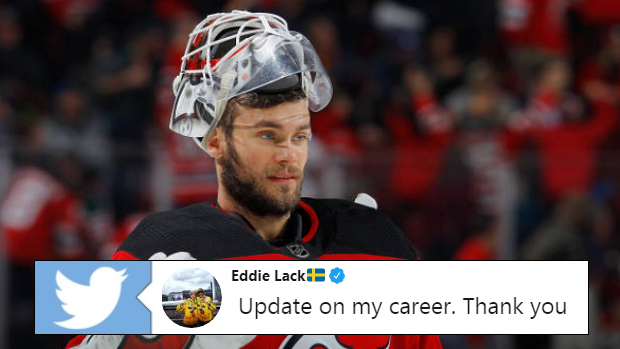 Goaltender Eddie Lack is taking a break from hockey, and unfortunately it’s not by choice.

On Wednesday night, the Swede took to Twitter to announce he will not be playing professional hockey for the foreseeable future. Lack cited injuries as the reason and confessed to dealing with hip pain over the past six years. On the bright side, the 31-year-old will serve as the goalie coach for Arizona State University and expressed his excitement over the opportunity to share his knowledge at the NCAA level.

Undrafted, Lack launched his NHL career with the Vancouver Canucks in the 2013-14 season and went on to play in 143 total games between the ‘Nucks, Carolina Hurricanes, Calgary Flames and New Jersey Devils with a 2.62 career GAA and 56-55-18 record. He started just eight NHL games over the past two campaigns while also making appearances in the American Hockey League for the Stockton Heat and Binghamton Devils. His former Devils teammate Keith Kinkaid had the best response to the decision of all.

Best of Luck to Eddie on the new job and hopefully we can see him between the pipes again in the not too distant future!