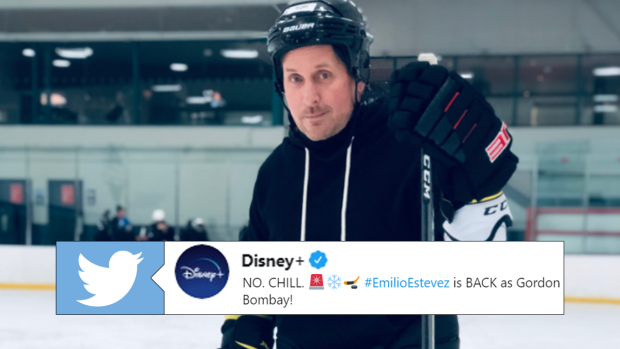 For hockey fans, there’s a number of hockey movies that will really ring the nostalgia bell. Slapshot, Miracle, MVP, you name it. Saying that, there’s likely no series that gets quite as much love as the Mighty Ducks trilogy.

D1, D2, and D3 are forever engraved in the hearts of hockey fans. Not for their accuracy or even knowledge of the game, but just out of sheer entertainment and message. With Disney Plus pushing their new platform, one of the most exciting announcements we’ve heard in a long time came recently.

The Mighty Ducks are coming back as part of a new series, and on Thursday we found out who the head coach would be: Coach Bombay himself.

Emilio Estevez confirms he's returning for 'The Mighty Ducks' Disney+ series — 'Once a Duck, always a Duck! And after 25 years, I am delighted to lace up my skates, put on Coach Bombay's jacket and return to play the iconic character' 🏒

The Quack Attack is Back, Jack! Emilio Estevez will reprise his role as Coach Gordon Bombay in the upcoming #TheMightyDucks series on Disney+

Estevez will join Lauren Graham and #GoodBoys' Brady Noon in the revival. pic.twitter.com/BGqLMeA3rg

Needless to say, hockey fans are pretty excited about it…

... and just like that, here's our first look at Emilio Estevez back on ice ⛸️