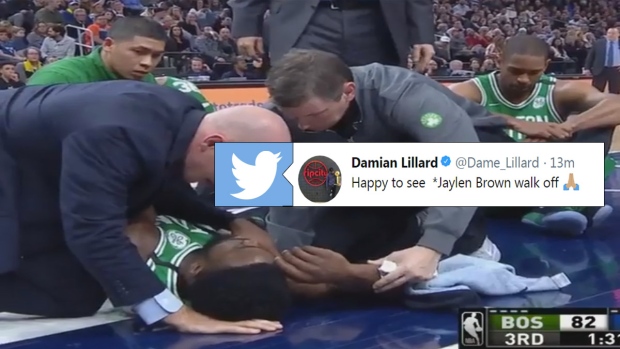 One of the reasons for the Boston Celtics’ success this year has been the emergence of forward Jaylen Brown. The 21-year-old sits second on the team in scoring, averaging 14.1 points per game, and sits tied for third in rebounding with 5.2 rebounds per game.

However, it looks like the Celtics might be without Brown for an extended period of time moving forward after the NBA sophomore experienced a scary fall on Thursday night in Minnesota.

Jaylen Brown walked off to a standing ovation in Minnesota after a scary fall. 🙏

Brown went hard to the rim to come up with the two points, but he ended up falling very hard and awkwardly. However, as scary as the scene was, it was nice to see Brown get up on his own and walk off the court under his own power and the crowd showed him some love with a standing ovation.

That Jaylen Brown is able to walk off and wave to the crowd after that scary fall is remarkable.

Prayers sent to you right now and up Jalen Brown!!!! Glad to see you walk off on your own 🙏🏾

Jaylen Brown is down on the ground and the entire arena has gone silent. Marcus Smart is down on his knee praying. Al Horford is sitting by Brown's side.

Jaylen Brown is sitting up and now walking off the floor. Really, really classy standing ovation from the Wolves fans.

Hopefully Brown is able to make a speedy and full recovery.