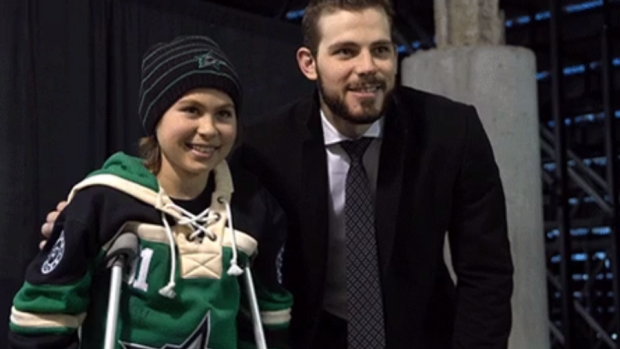 Injuries suck, and you don't have to be an athlete to know that.

Sure, it probably sucks more for professional athletes to be sitting at home or rehabbing rather than battling with their teammates to try and win a championship, but anyone that has had a serious injury knows how much sitting at home doing nothing sucks.

In fact, we'd argue that young kids that get hurt and are forced to wear a cast of some sort have it worse than players because at that age, all they want to do is play sports and run around with their friends, unless they really like video games.

Either way, anyone who's ever been hurt before somewhat understand what athletes are going through, so that's why it was cool to see Tyler Seguin take some time to sign this young fan's cast.

If you ever wore a cast for some reason as a kid, the only cool thing about it was that everyone could sign it, so that young fan is going to be the coolest kid in school with a Seguin signature on the cast.

Some more good came out of the kind gesture, too, as Erik Johnson of the Colorado Avalanche had the perfect response to the video.

Johnson's been out since early December with a broken fibula after blocking a shot, and the Avalanche have really struggled without their top d-man to say the least.

Maybe a Seguin signature would make him feel a little better about the entire situation, though.  Unfortunately for Johnson, the next time the Avs are in Dallas is in April and he could be back playing, but maybe he'll bring his cast along with him, just for kicks.