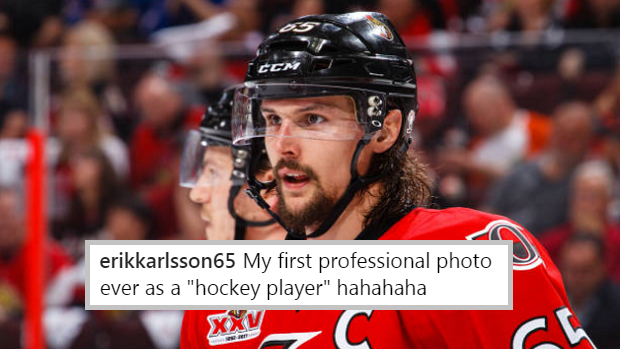 Erik Karlsson is the most dominant defender in the National Hockey League today, but there’s a chance he could have taken a totally different path in hockey.

As you can see in the photo below, Karlsson wasn’t always a defenceman. With his skating and puck skills, you have to wonder if he was a forward to begin with anyways, but this one stands out even more, as Karlsson shared his first professional hockey photo…he’s a goalie.

My first professional photo ever as a "hockey player" hahahaha

Karlsson was second in the league in shot blocks this season, so maybe we know where some of that ability comes from.

At the very least, he understands how difficult it is to be a goalie, so he does his a favour and keeps the puck in the other team’s end for the majority of the game. Karlsson has been an absolute beast for the Senators this postseason, and he’ll continue to be the driving force behind Ottawa’s Stanley Cup hopes.

All of this on a broken foot.

Oh yes ! It's going to round 2. So proud of the team and all the effort we put in this series ! @Senators