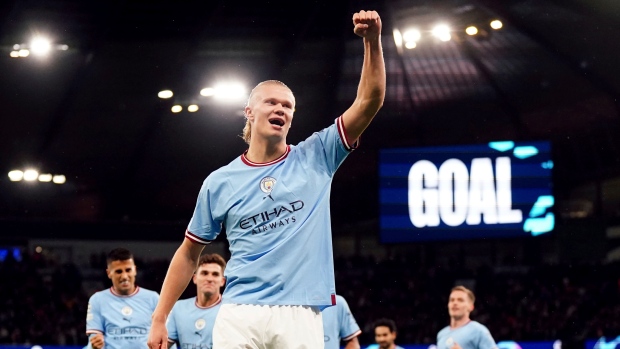 Erling Haaland took his goal tally to an incredible 19 in all competitions this season with another double in Manchester City's 5-0 demolition of FC Copenhagen in Champions League Group G on Wednesday.

Haaland wasted no time in getting City going with yet another strike in his remarkable campaign, sweeping home an early opener, before putting the game beyond the Danish side inside 32 minutes.

City kept coming and added a third six minutes before the break as David Khocholava put through his own net, with Haaland lurking just behind in the hunt for his second treble in four days.

There was to be no hat trick for Haaland as he was withdrawn at half-time, but the goals kept coming as Riyad Mahrez slotted home a penalty before Julian Alvarez finished things off with a late fifth.

The most comfortable of victories ensured City have taken a maximum nine points in the group and need two more to be sure of a spot in knockout stages. Copenhagen are bottom on one point form three games.

There may have been some sleepless nights among Copenhagen's defenders after Haaland bagged his third hat-trick since joining City in the close season against Manchester United on Sunday.

It took seven minutes on Wednesday for their nightmares to become a reality in the Manchester rain, as Haaland hammered home Joao Cancelo's pull back.

The Norwegian was then in the right place at the right time to convert the rebound after Sergio Gomez's shot had been saved.

Since failing to score or assist for Borussia Dortmund against City in April, 2021, Haaland has since been directly involved in 41 goals in his last 23 home appearances at club level, with 35 goals and six assists.

"It's unbelievable honestly," Jack Grealish told BT Sport when asked about Haaland. "I've never witnessed anything like it in my life. For the first and second goals I was just laughing. He is always there.

"The keeper said something to me as I was walking back. He said 'he's not human!' I said 'you're telling me?' Hopefully he can carry on this form and take us to glory."

If it were not for former Liverpool academy goalkeeper Kamil Grabara, Haaland would have had a first-half hat trick, and City could have been on course for a record win, given the amount of shots they had in the opening period.

They had to make do with one more before the break, Khocholava's own goal, with Mahrez stepping up to get in on the action from the spot early in the second half, following a foul on Aymeric Laporte in the penalty area.

Alvarez's third goal for City in all competitions was the icing on the cake, with the hosts wasting chances to make the result even more emphatic.

City have scored 20 goals in their last five games, all wins, a sign Pep Guardiola's team are hitting top gear.