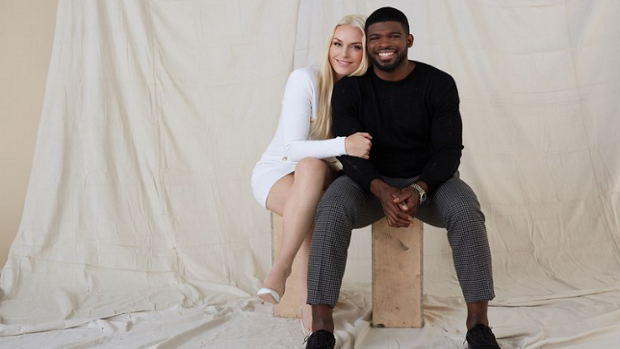 As soon as P.K. Subban and Lindsey Vonn made their relationship public back in June of 2019, they became pretty much everyone’s favourite sports couple right away.

The duo went from legends in their own right to sports royalty as a tandem, and in an interview with Vogue, have recently announced their engagement.

Congratulations to P.K. Subban & Lindsey Vonn on their engagement! 💍💕

The couple first made their relationship red carpet official in June 2018, and have been inseparable ever since.

In the interview, P.K. talked about how he’s always been one for grand gestures, but decided to keep things private and personal for the engagement.

“For Valentine’s Day, I’m the kind of guy who brings in a chef and gets flowers. I’m just like that; I don’t have to think about it,” he says. But for the proposal, he didn’t want to put on a show. “I wanted it to be very personal and about how serious I’m taking it,” he says. “It’s about us and our family. I kept it close to the chest. I got the ring and said, ‘You know what? I’m just going to do it at home.’”

And so he did. Subban proposed to Vonn at home with her three dogs as witnesses, and though she was completely caught off guard by the gesture, she was equally as excited.

Subban’s new team, the Devils, took to Twitter to congratulate the couple, and we imagine many others will soon follow suit.

The duo doesn’t have a date in mind yet, and Vonn said, “I just want to enjoy the moment and the engagement. We’re not in a big hurry to get married. It kind of depends on his playing schedule, and when we have time to sit down and go through it. I don’t want to stress him out because he has a big season coming”.

Whenever the day does come, we’ll be waiting impatiently on photos. Congrats, guys!