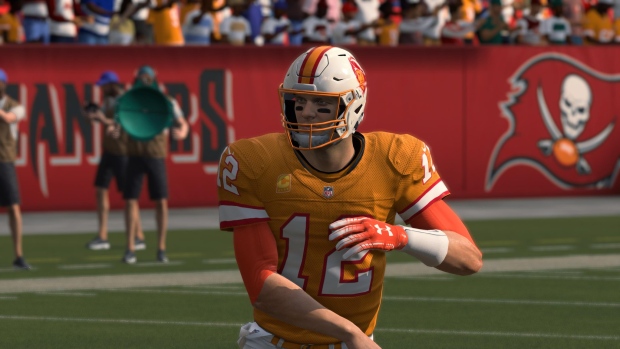 Ever since the Tampa Bay Buccaneers debuted their current uniform in 2014, feedback has been, um, mixed. (The calculator numbers. THE CALCULATOR NUMBERS.)

Now, their soft-orange creamsicle jerseys from when the Bucs originally joined the NFL in 1976? Indisputable classics. With all due respect to the Los Angeles Chargers’ terrific powder blue threads, pastels don’t get nearly enough play across the NFL.

Well, now that the Buccaneers have appeared to win the Tom Brady sweepstakes, there’s about to be a renewed focus of the Bucs’ design choices. This is going to be the first time that we’ll see Brady in a uniform other than Patriots navy, and everyone wants to see the Bucs come correct.

Yeah... it seems like by broad consensus, everyone wants the creamsicle threads back for Brady’s arrival in Florida.

Somebody even pulled it up in Madden to see what it would look like. (And by the way, the Bucs had previously announced plans to reveal new uniforms in April. Speculate away!)

Some of you asked for Brady in this uniform. Here ya go. pic.twitter.com/V1lJCSkOfn

if I'm Brady I demand the creamsicle uniforms

The Bucs can't have Brady wearing these awful uniforms. Must go back to the creamsicle uniforms https://t.co/sW6DPlHSdy

Look if Tom Brady is going to Tampa Bay, I’m really going to need the Bucs to go back to their creamsicle uni’s, mmkay? pic.twitter.com/WcHjZ6z0Ix

Can’t wait to see Brady in the creamsicle Jersey pic.twitter.com/n23N5TLFPp

If Brady goes to the Bucs, they gotta bring back the creamsicle jerseys pic.twitter.com/g3Ns3l6USY

Let’s hope @Buccaneers come out with a creamsicle throwback #Brady jersey.
Thank you.

🟠🔴Tom Brady, PLEASE, as part of your contract with Tampa Bay Bucs, demand that they return to their #Creamsicle roots. @Super70sSports @Buccaneers @TomBrady @Popsicle 🟠🔴 pic.twitter.com/D2yvJsHmvW