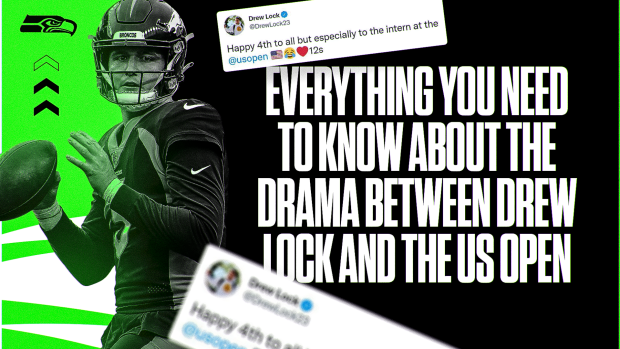 We’re currently in the middle of the 2022 Wimbledon Championship. Even if you’re not a huge tennis fan, we’re sure your social media feeds are filled with highlights from it.

With that said, it’s not everyone’s cup of tea and that’s okay. Twitter user, @seahawksfan2314 can probably vouch for that. Sportscenter tweeted a highlight from the tournament and Seattle fan’s let everyone know how he really felt about the game.

You could say the US Open’s twitter team didn’t like this one; or they just HAD the time for their haters. The account fired back with a pretty ruthless comment, bashing the Seahawks quarterback, Drew Lock.

It all went downhill from here. You could say things got ugly pretty quickly.

Ratio + ur event is poverty

remind us again, we're "not a sport"

aren't there only 32 NFL teams? pic.twitter.com/SIMBfVrDlF

Yikes, right? It wasn’t too long before Seahawks Wide Receiver DK Metcalf chimed in to stick up for his teammate.

Aight Chill we get the point @usopen

You know it’s bad when.

It took three long days but we finally got a reply from Lock. `

Wow, that could have gone south. What a classy response from the QB! In one ear and out the other.

The US Open’s twitter account followed his lead and capped off the drama with some pretty nice words!

What a rollercoaster of emotions.

The rest is history!