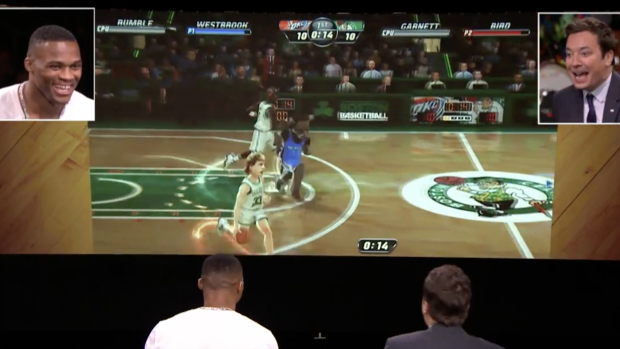 Challenging an athlete in the sport they get paid millions of dollars to play usually never ends well.

WATCH: We’re celebrating 100 years of the @nhl with a @mlauer/@savannahguthrie shootout! #NHL100 pic.twitter.com/l5tEEVIcmZ

The smart thing to do would be to challenge an athlete to the video game version of his or her sport, and that's exactly what Jimmy Fallon did when Russell Westbrook was on his show.

The reigning MVP would destroy Fallon on the court, but Jimmy proved to be a more than formidable opponent in 'NBA Jam.'

Not only was Fallon formidable, but he actually beat Russ thanks to Larry Bird's smooth shooting stroke and the clock running out.

When it comes to fashion, though, Russ knows best and he and Jimmy dished on Westbrook's unique style along with nicknames for he and his new teammate Paul George.

'ThunderCats' isn't the greatest nickname of all-time, but who knows, maybe it will catch on.

Retweet if you loved ThunderCats...pic.twitter.com/F0NwLRbehU