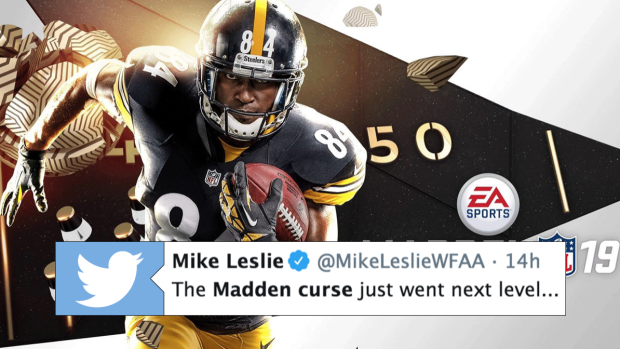 There's too much evidence (coincidence) to support the 'Madden Curse' being a very real curse.  More often than not, the cover athlete(s) for Madden has a down year production-wise due to many factors, injuries being the main one.

The curse works in mysterious ways and while many thought the strange and tumultuous ending to Antonio Brown's season and career with the Steelers was enough to satisfy the curse, they would be mistaken for thinking that.

So about the Madden curse pic.twitter.com/eQ5t6onvMY

Brown graced the cover before last season and it's seemingly carried over into this summer, as fans pointed out, thanks to the game's Frostbite Engine. For context, AB's feet were reportedly frostbitten and that's one of the reasons why he hasn't been able to participate in training camp for his new team.

Antonio Brown's mysterious foot injury is the result of extreme frostbite caused by a cryotherapy machine, a source confirmed to ESPN. https://t.co/yeIDVBsBCM

I just discovered something GROUNDBREAKING. Antonio Brown is on the cover of madden 19. So is the word FROSTBITE. The madden curse just went to a whole new level....oh and if you think I’m kidding 👇🏼 pic.twitter.com/MvIvi0s2ty

If this ain’t proof that the Madden Curse is real, then idk what is 😵 pic.twitter.com/kovlK9nKZ7

The Madden Curse just went on to another level... pic.twitter.com/snzIMYDyop

The curse strikes again and we sincerely hope the extra cursing on Brown will allow it to skip over Patrick Mahomes because he's the most exciting quarterback in football and we just want to watch him play all season.