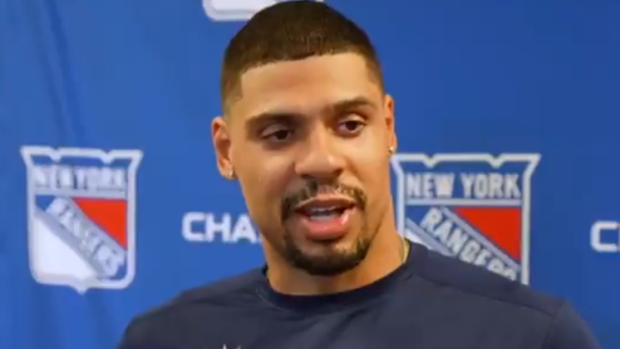 Ryan Reaves moved from the Vegas Golden Knights to the New York Rangers during the offseason, which means the Metropolitan Division inherited one of the toughest guys in the league. Reaves has made it known throughout his career that he doesn’t back down from anyone, and he’ll always back up his words with action.

After Reaves was injured during preseason on a play in which New Jersey Devils defenceman P.K. Subban dragged his foot and caused an awkward fall from Reaves, the Rangers tough guy had to be helped off of the ice. It sparked a debate around the hockey world as to whether or not the play was clean.

In the end, Subban was not suspended for the play. On Tuesday, Reaves was asked whether or not he thought the play was clean. This is what he said…

Ryan Reaves when asked if he thought the play with Subban was clean... pic.twitter.com/06DL8Z4CWv

Yeahhhhhh, sounds like Reaves isn’t putting this situation behind him quite yet. Reaves also followed up that moment of presumed sincerity with a moment of comic relief.

Fans certainly seem to think there are some fireworks yet to be lit off.

Ooooh, can't wait!!! Fireworks! Going to be a fun season when Reaves is on the ice. LGR!!

PK about to have the flu next time they play 😂