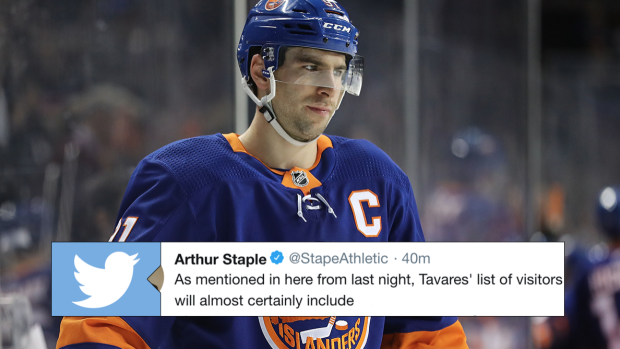 It's official!  According to John Tavares' agent, the highly coveted forward, will take advantage of the UFA speaking period and speak to five teams.

What team will #Tavares be on next season? 🤔

The hockey world has been speculating for months as to where Tavares will be playing hockey next season and now the speculation is all about which teams has he chosen to meet with.

We imagine it might take some time to find out what teams Tavares will meet with, but we do have some reports that might clear things up or create more speculation.

As mentioned in here from last night, Tavares' list of visitors on Monday/Tuesday will almost certainly include TOR, SJ and DAL. TBL may be in there too. LAK, after signing Kovalchuk, likely out. Perhaps VGK gets in there. https://t.co/pIe8CyCKwz

Told Vegas is 1 of the 5 teams Tavares will speak with this week.

I am told (though not by agent or NYI) that Tavares will meet with five teams during interview period that opens tomorrow. Rangers are not among them.

All 5 teams Tavares will speak with are not yet known. I’m told the Blues and Rangers are not among them.

LRT …
In case you wondered, #CBJ not among the five teams who will get a meeting with John Tavares.

We're sure more teams will come up in regards to meeting with Tavares over the coming days, but for now all hockey fans can do is hope there team will get a meeting with him.

Maybe, but leafs fans have the out of their mind market kinda cornered

Habs, Leafs, Sharks, Knights and not sure about the 5th