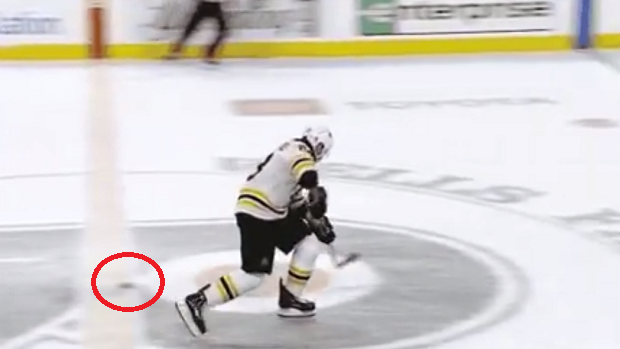 Brad Marchand is currently tied for fifth place in NHL scoring with 62 points in 46 games played, and his Bruins only have eight regulation losses in the entire season.

All of that meant just about nothing, though, when Marchand overskated the puck in the shootout tonight.

This nightmare started for the Bruins when they blew a 5-2 lead, and ended when Marchand tapped the puck with his stick when he blew past it in the shootout, which resulted in the Bruins losing the game to the Flyers.

You can only imagine how Twitter is handling this one.

IT'S OVER! Marchand over skated! #BOSvsPHI

How many RT’s for Brad Marchand’s filthy shootout attempt? 🔥😩 pic.twitter.com/vlqGs4Hs3C

Marchand: I got this shootout...

I…don’t think I’ve ever seen that. Brad Marchand just missed the puck at center ice on the shootout. Never even got it outside of the circle. #Flyers win

I know the #NHLBruins have consistently struggled in shootouts, but Marchand failing on his attempt before the puck even left the faceoff circle is something I hadn’t seen before. #PullTheGoalieInOT pic.twitter.com/q2xn6MeSIq

You REALLY hate to see Brad Marchand screw up that badly. Like it’s really, REALLY unfortunate that it happened to such an awesome and loved hockey player like Brad Marchand. Go Flyers. #flyers

This is a meme goldmine.