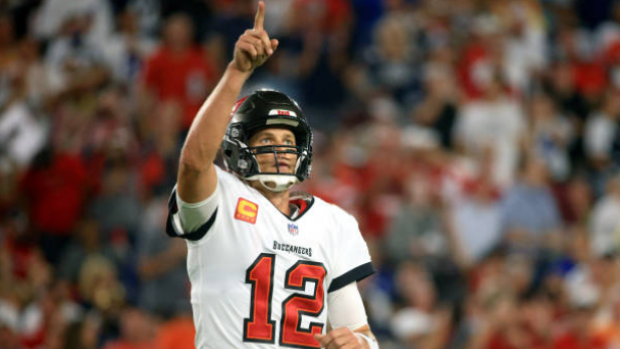 Despite being the oldest player in the NFL, Tom Brady is debatably the best social follow. From his spicy takes to his unapologetic chirping, Brady’s posts are always a hit.

The posts that we appreciate the most are most definitely his troll jobs, though. Brady has become an expert at trolling everyone from his opponents, to his teammates, to – ESPECIALLY – the Atlanta Falcons.

Brady and the New England Patriots famously came back from a 28-3 deficit against the Falcons to win Super Bowl LI. Since then, the Falcons haven’t been able to escape the 28-3 jokes, a gag that Brady himself most definitely is NOT above.

When Brady released his weekly win video, fans couldn’t help but notice a little easter egg in the clip. The time on Brady’s computer screen read 3:28.

Between the glare on the screen and Brady’s shoulder constantly getting in the way, you can HARDLY see the time. Is this the product of Brady trolling in the most expertly subtle way, or is it actually just a coincidence?

In his weekly “W” video, Tom Brady leaves a computer screen on in the back with the clock on 3:28.#Bucs play the #Falcons this week. What a savage. pic.twitter.com/5UoxVm687T

What are the odds he recorded this at exactly 3:28 and just so conveniently the time is slight peeking over his shoulder

Let’s be honest he didn’t do that on purpose. That’s just a coincidence

Has to be a coincidence