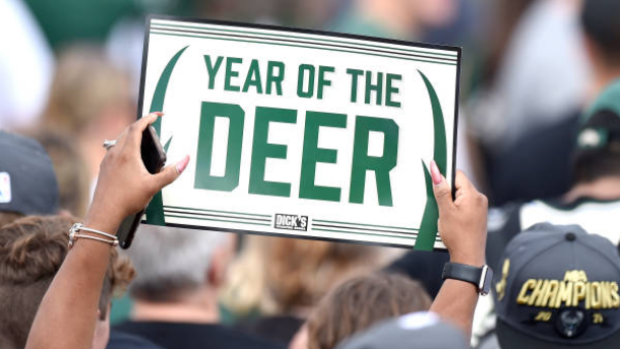 Just two years ago, the Toronto Raptors held one of the craziest championship parades of all-time. Millions showed up on the streets of Toronto to pack the city with Raptors jerseys and hats as the players heroically boasted their freshly earned Larry O’Brien Trophy.

It was so packed, the parade took approximately 3 times longer than expected.

Fast forward two years, and it’s the Milwaukee Bucks turn to parade through their city. The buses were only traveling for about 1.5 hours, and there are a few reasons for that.

There aren’t nearly as many people as the Raps’ 2019 parade, but the real speedy hilarity came when the NBA shared out the “beginning” of the parade. It was really just the Bucks bus being revealed on its way to the parade start, but it’s unexpected pace had viewers cracking jokes.

You even hear the fans moan in disappointment as the bus disappears around the corner. Definitely not what the fans were hoping for after waiting outside the starting spot!

dang they need 2 slow down LOL

So much for Enjoying the Moment? What’s the hurry @Bucks bus driver?? Do you have a train to catch??🤣🎉🏀 https://t.co/6SRX8ev4F2

The Bucks are so far removed from their last title that the bus driver doesn’t know you’re supposed to let that thing roll. https://t.co/lVIgzA6Zw4

Imagine waiting 50 years for a championship, then waiting in a crowd outside to celebrate with the players and the bus driver turns out to be Lewis Hamilton. https://t.co/sslaQsk5wI

Who wants to watch the Bucks victory bus...

this the fastest parade ever, bruh filming Speed 3 https://t.co/7f1MQ1S5CX