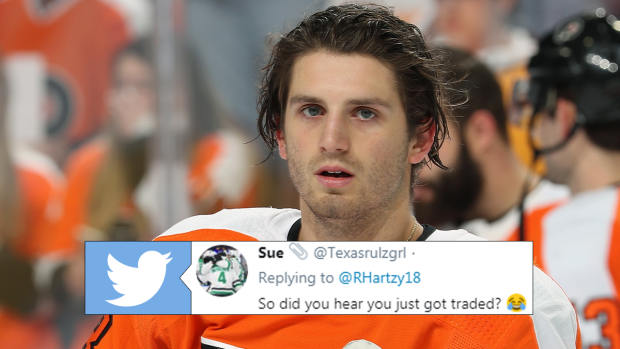 At only 24 years old, Ryan Hartman has already been traded three times in the NHL and the latest one had to have been the most relaxing.

That’s because he might not even know that he has to move to a different city yet.

On June 21, he tweeted that he was “Heading off the grid till next Saturday”. So if that is the truth, he’s still four days away from finding out about getting traded from the Philadelphia Flyers to the Dallas Stars.

Heading off the grid till next Saturday... if you need me... leave me a voicemail ✌🏽world pic.twitter.com/6Megt1CTdC

Obviously, because of the serendipitous timing, fans were all in his replies about the potential that he hasn’t yet realized that he has been traded yet.

tfw you’re going OOOOOFFF the grid and then u get traded pic.twitter.com/MtNh688Q5L

@sbrannen8 think he knows yet? Lmao

However, we’re pretty sure we know exactly what Hartman’s face is going to look like when he finds out about the trade. He already has the perfectly timed picture to show his reaction.

*Record scratches*
*Frame freezes*
"Yep that's me Ryan Hartman. You're probably wondering how I got into this mess." pic.twitter.com/TWVyeNsYL1