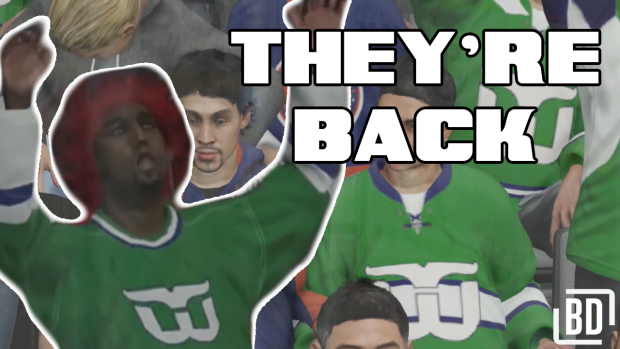 While playing NHL 17, we noticed that certain teams wear throwback jerseys in their new team’s crowd, even when the team has moved cities.

It happens a lot to Dallas and Carolina fans, as Minnesota North Stars and Hartford Whalers gear shows up throughout the crowd. It is pretty reflective of which teams are still popular because many people still wear gear from both of these teams.

Combine that with the fact that Hartford’s Mayor offered the New York Islanders a new home in Hartford, and we were inspired. So, in the latest edition of Thumb League, you can see as a breaking news segment alerts fans of a virus that is bringing extinct fans bases back to life. Although, we suppose it’s more of a gift than a virus.

Episode 2: Was the triple deke a good move?

Episode 3: Matthews and Marner taking singing to the next level in NHL 17

Episode 4: The life of a ‘Grocery Stick’

Oh, and if a taste of the Whalers goal song (Brass Bonanza) left you wanting more, here’s the full thing: