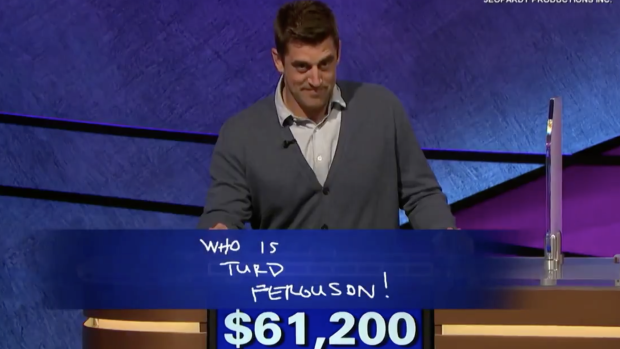 Continuing for the near future, a series of celebrity guests are hosting the game show Jeopardy in the aftermath of longtime host Alex Trebek’s passing late last year from a two-year battle with cancer.

The first guest host up was former contestant Ken Jennings, but sports fans have another one to look forward to. Aaron Rodgers, who was a Jeopardy contestant in the past, was previously announced as an upcoming guest host, and now we know when.

For two weeks in April, Rodgers will host ten episodes of Jeopardy.

#Packers QB Aaron Rodgers’ two-week run as a @Jeopardy guest host will begin April 5th, per @GaryMLevin. Among the other guest hosts: Katie Couric, Dr. Oz, Anderson Cooper and Savannah Guthrie. Each will have a two-week stint and taped their 10 episodes over two days in January.

Rodgers has been a longtime fan of Trebek and the show, so it’s cool to see that he’ll have an opportunity to take over the hosting duties temporarily.

He should definitely be pretty familiar with the format, after former TSN personality Cabbie Richards put him through a few rounds of personal Jeopardy in 2019.