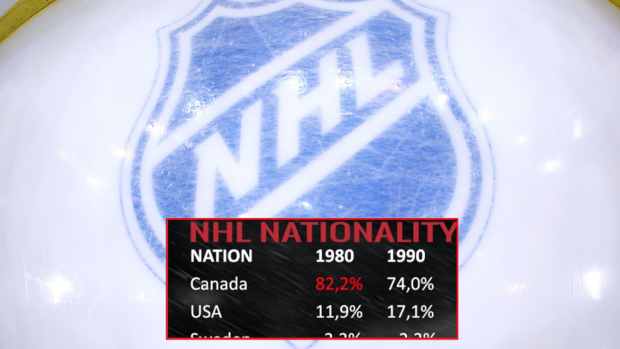 Hockey is a popular sport, but not just in North America.

Yes, it's no secret that Canada and the United States produce the most NHL players, but there is talent in the NHL from around the world and they've helped grow the game over the years and make the sport popular globally.

Disappointing news, @NHL won't be part of the Olympics 2018. A huge opportunity to market the game at the biggest stage is wasted..

Back in the 1980s, though, the NHL wasn't as diverse as it is now and this NHL Nationality Breakdown from Eliteprospects displays that and how the game has grown:

As you can see, the majority of NHL players have always been Canadian and American, but Canada's percentage has decreased significantly from 1980 as hockey became more popular worldwide and players from all over the world played the sport growing up and eventually made it to the NHL.

Something else worth nothing, as per this breakdown, is that there are currently 16 countries represented in the NHL right now and as the game continues to branch out into different parts of the world, we expect that number to increase.