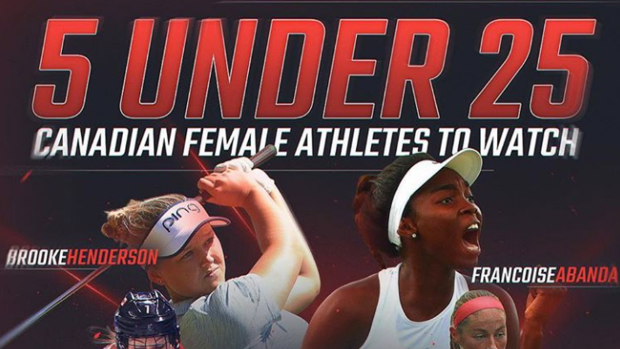 Today is International Women’s Day, and around the world, women are being celebrated. On this day, it’s important to remember extraordinary achievers who have and continue to pave the way for future generations -- and it’s also important to celebrate the up-and-comers, because they are the future.

We know about the likes of Genie Bouchard, Hayley Wickenheiser, Christine Sinclair, Clara Hughes, Penny Oleksiak (Obviously young, but very accomplished) and many others. Here are five Canadian women in sport who have bright futures ahead and merit tracking:

At the age of 20, Henderson has already become a force to be reckoned with in women’s golf. She is currently ranked 13th in the Women’s World Golf Rankings and has peaked as high as second on the list, doing so after capturing her first major title in 2016. With five LPGA wins under her belt, she already ranks second all-time among Canadians to Sandra Post.

As a member of the NCAA’s Connecticut Huskies, Nurse was key to the team that snapped off a 111-game winning streak over the course of three seasons. That, by the way, is not just a NCAA record in basketball, but any team sport. Nurse remains with UConn, just this week winning a game where they, at halftime, held a 43-5 lead. She has already featured with Team Canada, and the WNBA is surely to come.

Stacey captured silver as a member of Canada’s women’s hockey team at this year’s Olympics, and has already made her mark in the CWHL as well. After being drafted third in 2016 by the Brampton Beast, she became an All-Star in her rookie year, and finished with 19 points in 18 games. She also happens to be the great granddaughter of Hall of Famer King Clancy, but clearly, she stands well on her own right.

Get you someone who looks at you like @LauraStacey7 looks at @nursey16 🇨🇦 pic.twitter.com/2exQ3AHe1A

Dominant at the junior level and now rising fast in the pros, 21 year old Abanda is one of the brightest young stars in all of tennis. She currently ranks 120th, but impressed everyone with a win over No. 33 Irina-Camelia Begu in 2015.

Though she’s a dual citizen of Canada and the United States, Beckie features with the Canadian national team and has netted 22 goals through 41 appearances -- the second highest total on the current squad, although Christine Sinclair’s 172 goals remains untouchable. In 2016, she was drafted eighth overall in the NWSL, and she currently plays for Sky Blue FC in New Jersey.

A classic #CANWNT counter-attack. @JanineBeckie4 finishes off a lethal team move against the Americans for number THREE on our Top Five Goals of 2017 countdown. pic.twitter.com/AxGGSvdqjK