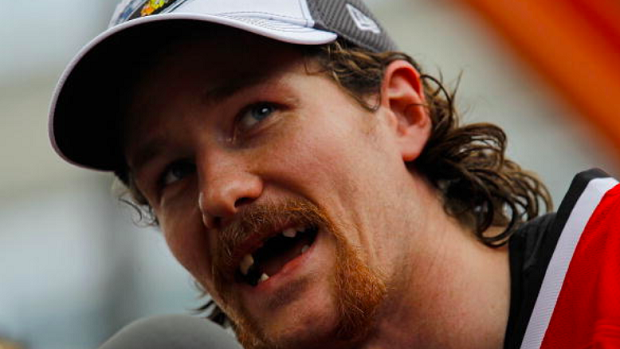 "They doesn’t have goalie gear but they have to block the shot. Who is more crazy: me or defencemen?" - Ilya Bryzgalov

Goalies have the reputation for being the wild card or being the "weird" one on the team, but Ilya Bryzgalov brought up a good point when he pointed out that defencemen are crazier than goalies because they willingly block shots with smaller equipment on.

Duncan Keith isn’t exactly known for throwing the body around, but he’s always willing to put his body on the line if it means securing the victory. In 1,138 regular season games, Keith has recorded 1,805 blocked shots to just 629 hits, and has played the most games of the five players on this list.

Kris Russell has provided his services to five different NHL teams throughout his career and he’s put his body on the line for all of them. In 846 games, Russell has blocked 1,901 shots…resulting in a lot of bruises.

Ron Hainsey is in his 17th season he hasn’t missed much time during his career, which is pretty incredible considering he sits third on the all-time blocked shots list. In 1,100 career games, Hainsey has blocked 1,933 shots and has a good shot at finishing in the top two when his career is all said and done.

The only retired player on this list is Dan Girardi. The former New York Rangers and Nashville Predators defenceman played 927 NHL games and recorded 1,954 blocked shots during that time and held the record in the category until this season.

Brent Seabrook recorded 61 blocked shots in 32 games this season to move him into top spot on the NHL’s all-time blocked shots list. Sitting at 1,998 blocked shots, the Chicago Blackhawks defenceman is two blocked shots shy of becoming the first player in NHL history to hit the 2,000 blocked shots mark.