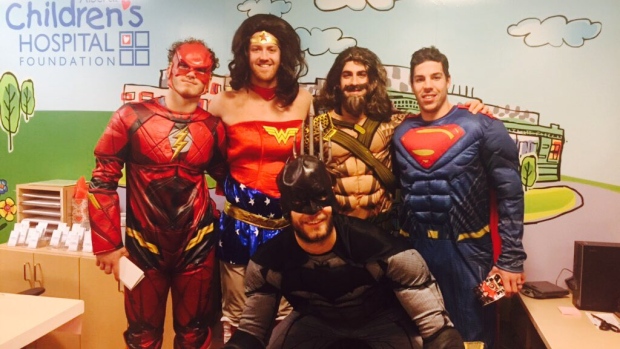 One of the best parts about Halloween is seeing athletes team up with their teammates and bring a smile to the faces of children.

Take the Boston Bruins for example, who dressed up as Star Wars characters and visited the Boston Children’s Hospital.

May the Force be with you. 🎃👻 pic.twitter.com/aQdRvp3FOe

I don’t think @JDebrusk knows what a lightsaber is pic.twitter.com/99KwrIFx2I

"These are the things away from hockey that make us all happy." #NHLBruins take part in annual Halloween hospital visit: pic.twitter.com/nLNZj8kqDr

The Calgary Flames spent the afternoon on Halloween at the Alberta’s Children Hospital.

The Justice League has arrived at the Alberta Children’s Hospital. pic.twitter.com/ZCqXwE45VX

Dougie Hamilton spearheaded the initiative, and the Flames played mini sticks with some of the kids.

The boys got in a little hockey this afternoon with Loic! pic.twitter.com/p6jk3Fuqkt

Good on the Flames for going out of their way to bring happiness to those in the hospital. It’s one thing to have hockey players visit, but having them come in some of the most notable super heroes out there will surely bring smiles to faces.