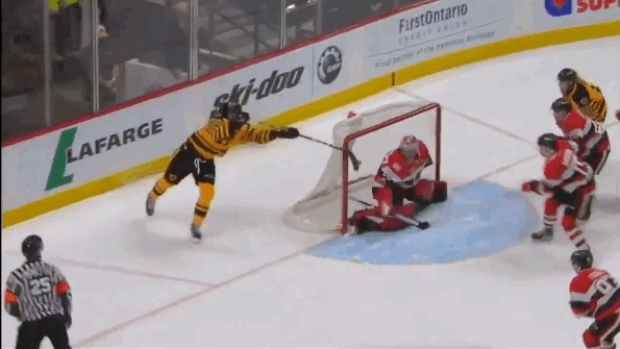 The Strome family is one of the more decorated families in the hockey community, and over the weekend, they were making headlines across the hockey world.

The oldest of the three boys, Ryan, is playing his first season with the Edmonton Oilers after an off-season trade from the New York Islanders, and scored the game-tying goal in the Oilers 4-2 win over the Bruins on Sunday.

Middle child Dylan was just recalled to the Arizona Coyotes from the Tucson Roadrunners after tearing up the first quarter of the AHL season with 8 goals and 18 assists in 15 games.

"I'm just going to play my game, just keep doing what I was doing down in Tucson."
Dylan Strome hoping that his latest recall to the @ArizonaCoyotes will stick.
→ https://t.co/ju5ZKqPHPd pic.twitter.com/jYMq0yUDfY

The youngest of the three, Matthew, was selected in the fourth round (106th overall) of the 2017 NHL Entry Draft by the Philadelphia Flyers. The 18-year-old is in his third season with the Hamilton Bulldogs, and showed off an terrific skillset in an OHL game against the Ottawa 67’s on Saturday night.

With his team up 4-2 in the 3rd, Strome took a bouncing puck from an errant slapshot behind the net and scooped it up and to score a terrific lacrosse style goal.

WATCH THIS: @Mstrome16 are you kidding me 😱

Lacrosse style goal by the @NHLFlyers prospect is one of the most skilled plays you’ll see @BulldogsOHL: pic.twitter.com/9A1iSTUbNZ

That was Strome’s second tally of the night. The youngest Strome now has an eight game point streak and is just a point behind Brandon Saigeon and Will Bitten for the Bulldogs’ team leads in points.

Unlike some lacrosse goals scored in the past, this was more of an opportunistic goal given the bounce on the board and Strome being right in the vicinity of the bouncing puck.

18-year-old Matthew Strome of the OHL Hamilton Bulldogs with the sweet lacrosse-style goal. He could be on the Phantoms in two years. pic.twitter.com/bkHqiDF1gW

And another one of Raymond being good at lacrosse to give Canada lead. pic.twitter.com/wUQaTMO8AI

Strome also had a fight to go with his two goals and assist.

Gordie Howe would be proud.