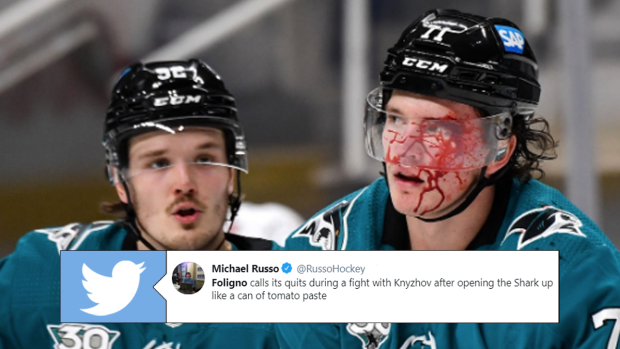 Hockey can be a brutal sport at times, we all know that. It’s the only major professional team sport that allows for bare-knuckle fisticuffs to occur, so it’s bound to get bloody from time to time.

Saying that, hockey players generally try to maintain a certain level of class through it all. This seemingly contradictory balance was on full display when Minnesota Wild big man Marcus Foligno and San Jose Sharks defenceman Nikolai Knyzhov dropped the mitts.

Foligno bloodied Knyzhov badly enough that he called for the linesman to stop the fight and skated away pic.twitter.com/MeJ3rAw369

Foligno clearly recognized that he’d put Knyzhov into a vulnerable position, and instead of continuing to whale on the guy, he asked for the linesmen to break it up early. Not everyone would be as classy as Foligno was in that moment, but it’s nice to see nonetheless.

Foligno would go on to score a goal and record an assist. That’s right… the Karma gods rewarded him with a Gordie Howe hat-trick.