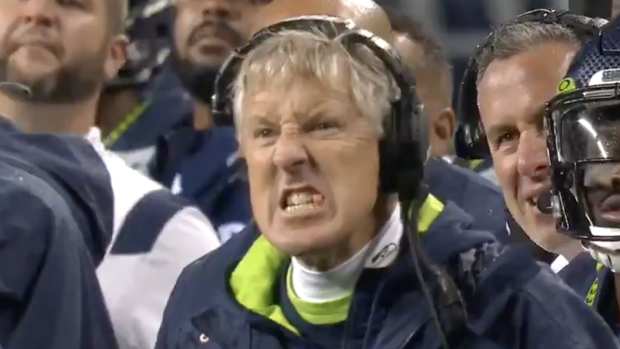 Seahawks fans, we get it. Losing one of your star players absolutely sucks. With Russell Wilson being out with a finger injury, things just aren’t looking too bright as the Seahawks have lost their third consecutive game following MNF’s game against the New Orleans Saints.

Losing 13-10 due to a late field goal by the Saints, the Seahawks’ record currently sits at 2-5 and if there’s anyone in the world who could sum up how Seahawks fans feel, it’s head coach Pete Caroll.

During MNF’s broadcast, Caroll quickly became an online meme as he had a pretty hilarious yet angry reaction to the Seahawks missing a potential lead-grabbing field goal in the fourth quarter.

Honestly, that piece of gum never stood a chance.

you know Pete Carroll pissed when he throw his gum…

And of course, football fans had an absolute blast reacting to Carroll’s MNF presence.

Pete Carroll is making the same face every #seahawks fan watching the game is tonight pic.twitter.com/M8jXstL9jS

Here you are my friend. pic.twitter.com/yhgPSSXOEF

My new favorite pic. This is me when it rains, or when the Seahawks lose, or when I realize it’s laundry day. So good! https://t.co/tayO9X9EY7

My face when someone says you should smile more often. https://t.co/VgLKnTxriq