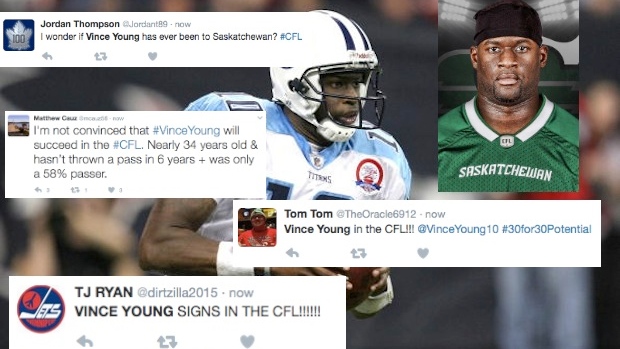 On Wednesday afternoon, TSN's own Gary Lawless announced agent Leigh Steinberg and quarterback Vince Young were en route to Regina to finalize a deal with the Saskatchewan Roughriders. The third overall pick in the 2006 NFL Draft is now 33 years old, and hasn't been on an NFL roster since the 2014 offseason, when he was with the Cleveland Browns.

Nevertheless, the former NFL quarterback is most likely on his way to Saskatchewan, and could be suiting up for the green and white this upcoming season.

Both Canadian and American football fans took notice of the signing, and we grabbed our favourite reactions for your viewing pleasure:

#VinceYoung is on his way to Regina. Visit TSN.ca for more.

I'm not convinced that #VinceYoung will succeed in the #CFL. Nearly 34 years old & hasn’t thrown a pass in 6 years + was only a 58% passer.

I wonder if Vince Young has ever been to Saskatchewan? #CFL

This will go poorly, I wager https://t.co/wXLLF8ZbJV

Vince Young will be a Rider, Tony Romo will be a Bronco. My football teams are amazing

I really like Vince Young signing in Saskatchewan. I love seeing guys who played in the NFL coming up north to play in the CFL.

Sooooo, Vince Young is going to be a #Rider. Oooookay.

Even Calagary Stampeders quarterback Bo Levi Mitchell had his say...

Looking forward to battling this guy. Big name coming to the @CFL . @leighsteinberg 2 Texas boys about to battle it out. https://t.co/kgMg3ZPtTD

What do you think; will Vince Young succeed or struggle in the CFL?