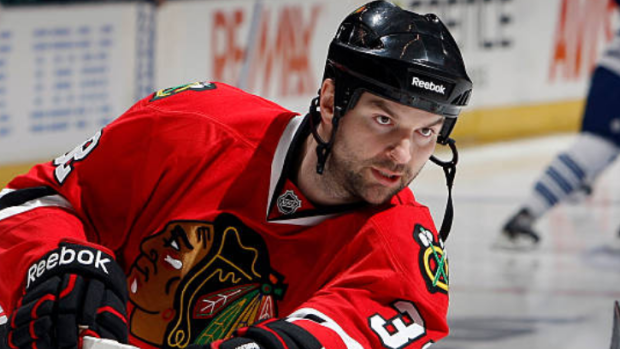 The Chicago Blackhawks have been going through a bit of an identity crisis lately as they transition from being one of the league’s most solidified dynasties to rebuild mode.

While the same core of Jonathan Toews, Patrick Kane, and Duncan Keith is still the centerpiece of a team that eliminated Connor McDavid and the promising Edmonton Oilers from the adjusted Stanley Cup Playoffs recently, the official indication of a rebuild came when the team made some tell-tale trades before sending out a letter to fans explaining their approach.

Former Chicago Blackhawk John Scott thinks the team should be embarrassed for how they’ve treated this situation.

On his podcast Dropping The Gloves, Scott goes in on Blackhawks’ brass for their actions. He uses the word “embarrassed” a number of times, and hits a lot of the same notes that many ‘Hawks fans have been feeling throughout the process.

“The fact that they’re just giving into their fanbase, having to write that letter… is embarrassing (…) Saad isn’t good… He wasn’t good… Zadorov is going to do way better in the Hawks’ organization. Crawford was light years better than any of these other goalies they have. If I was the organization, I’d be embarrassed. If you’re going to rebuild… try and trade Toews… They organization should’ve ignored the fans, because they answered to them. And what are they (fans) going to do more of? Complain. And they’re (‘Hawks) going to be expected to answer to them again. I think it’s embarrassing they wrote this letter, I think they should be ashamed of themselves. You shouldn’t have to explain your moves to your Twitter trolls because you made a couple of trades. If anything, the GM gets fired by the President in a few years because it was a bad trade… It looks soft. An original six team, releasing something like this… It’s just embarrassing.”

Former Blackhawk John Scott shared his thoughts on the #Blackhawks message to fans in his podcast “Dropping the Gloves.”

A post shared by Chicago Blackhawks Coverage (@everydayblackhawks) on Oct 23, 2020 at 9:19pm PDT