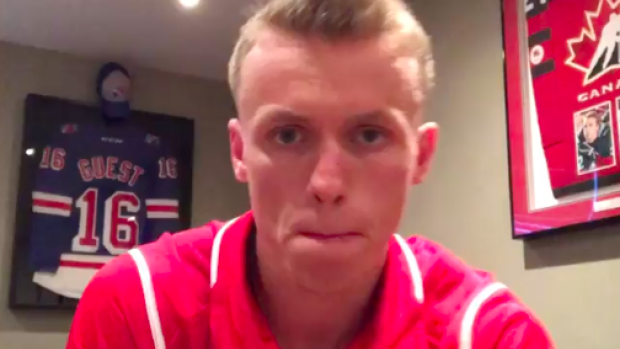 A former player on the Kitchener Rangers, Eric Guest, is speaking out about his experience with abuse in the OHL.

Guest, who played with the Rangers for three seasons from 2016 to 2019, describes himself and another teammate being coerced to do cocaine when he was 16 by an older teammate.

As part of the 15-minute video shared to his Instagram, Guest says that he plans to continue talking about issues he experienced in the OHL, and that he feels able to speak out specifically because he’s no longer pursuing a career in pro hockey.

Guest, now 20, says an older Rangers player took him and a young teammate into a bathroom at a team party during the 2016-17 season, locked the door and demanded they do drugs.
Guest posted his video on Sunday. He has not been contacted by the Rangers or the OHL.

Guest says he plans to post weekly videos about his experience in the OHL, detailing his treatment for concussions and other injuries and hazing.
Guest: “I would never say anything if I was still playing. You can’t. Any chance at playing pro hockey would be over instantly."

Eric's mom Tracey says she supports him sharing his story publicly and says she's heard from many families whose sons have had similar experiences in major junior hockey.

The topic of abuse, harassment and discrimination within hockey locker rooms has come under discussion over the last year with great intensity, following stories shared by multiple players of improper behaviour by coaches and teammates.

More recently, TSN In Depth with Rick Westhead has examined racism in the Greater Toronto Hockey League and how it was dealt with in the past, with penalties and suspensions being part of the process. The league recently announced a review of their processes by an independent committee, and are awaiting to hear if there are any recommendations for required change.