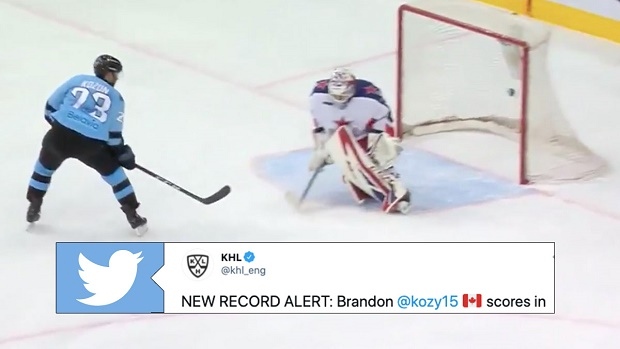 After multiple seasons in the AHL and a short stint with the Toronto Maple Leafs, Brandon Kozun took his talents overseas to the KHL and he’s been there since 2015.

Now in his 6th KHL season and his first with Dinamo Mn, the 30-year-old currently ranks 4th in the league in scoring with 13 goals in just 19 games, and he’s leading his team in both goals and points.

On Saturday, Kozun and Dinamo Mn came up short against CSKA by a score of 5-1, but the former Maple Leafs prospect scored the only goal in the loss, which helped him set a new franchise record.

After scoring just nine goals and 22 points in 47 games last year, Kozun is already up to 13 goals and 21 points through 19 games with his new club, and he has seven goals over his past six games and 11 points in his past eight contests.