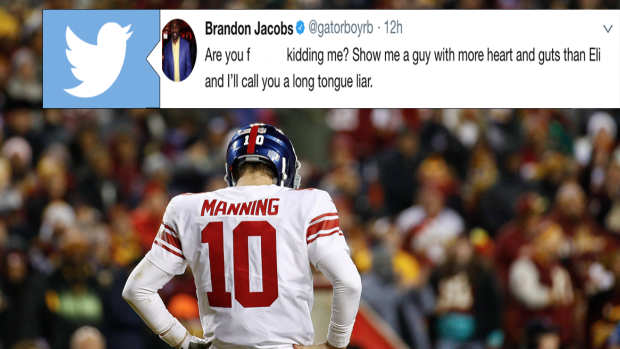 This season has been an absolute nightmare for the New York Giants and just when you thought things couldn't get any worse than their 2-9 record, they shocked the football world by benching Eli Manning on Tuesday.

The greatest quarterback in the franchise's history and a guy who's probably going to be in Canton one day won't be starting for the Giants on Sunday when they take on the Oakland Raiders.

Instead, Ben McAdoo is rolling with Geno Smith and if things get really bad, we could see Davis Webb, too.

Davis Webb: The way Eli handled himself today he was first class. He's very supportive...I learn something from him everyday.

McAdoo has taken heat for a number of decisions he's made this season, but this decision raised the temperature to an extreme high, and once the news broke, a number of former players and teammates of Manning's stuck up for him while ripping the Giants organization.

All you hear is how classy the NYG organization is and then they pull a move like this. Eli Manning helped win them two Super Bowls. It’s not like they’re playing for something this year. Let the man finish the season out and then do what you have to do. Show some respect

Wow so Eli Manning get benched. Is it me or is #BenMcAdoo running out of ppl to throw under the [🚌] Bus. He's like a student who didn't study for a test but keeps saying the teacher just doesn't like me. No Son you failed yourself. Str8 donkey #facts

Talked to one of Eli Manning’s former NFL coaches today. He told me the starting streak means the world to Manning, and that he feels answering the bell every week is the ultimate accomplishment in the NFL.

What would @kurt13warner do if the HOF QB were in Eli Manning's shoes? pic.twitter.com/E4qidoGaUF

@BobPapa_NFL & I just took a break from our radio show to grab a coffee to see only 2 @Giants players in the cafeteria. It was Eli Manning sitting next to Davis Webb mentoring him #Respect #Character #Selfless

Damn! Bench Eli? Man showed up every week for 14 years.

Are you fucking kidding me? Show me a guy with more heart and guts than Eli and I’ll call you a long tongue liar.

The only quarterback that’s ever thrown me the ball. I can’t say I agree with the decision… https://t.co/PogTrznzUO

With the season already over for the Giants, there is no reason to put the all time greatest NY Giant quarterback through this. He has brought two Super Bowls to that organization. They can give him 5 meaningless games. https://t.co/mgZnRj7igO

Our guy (and Eli Manning’s predecessor) Kurt Warner not holding back on @nflnetwork pic.twitter.com/xycVcq5vqp

Let me get this straight #Giants.

•Had a ‘16 pro bowler leave the facility out of frustration

Sad for Eli "The QB." Angry for my Former Teammate & friend. PROUD of the CHAMPION. Did it all with CLASS & HONOR. Too bad the @Giants couldn't return the favor

Hours later and just more questions than answers. More anger really. Sounds like McAdoo & Reese trying to save their ass. You had time to fix things, It's called the Off-Season!! NOW YOU WANT TO EVALUATE!?

You don't do a player of his status like this. There's a thing called respect in our game that the @Giants certainly don't understand. Truth

- #EliManning has been a great example to quarterbacks on how to handle yourself with media, fans and on the field @Giants

If you think things can only get better from here, wait until Sunday because with Geno at the helm, things have the potential to be a whole lot worse.

Geno Smith has the lowest passer rating as a starter of any quarterback with 30 starts since he was drafted in 2013 pic.twitter.com/UrpvUjHbd4

If Manning doesn't player another down of football for the Giants, it's been a pleasure watching him play and hope he finds success somewhere else.