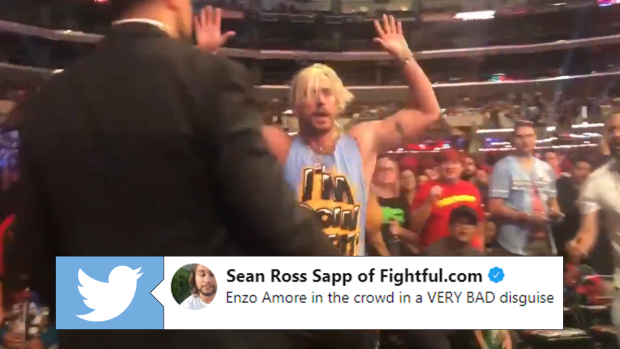 When Enzo Amore showed up to Staples Center for Sunday night’s Survivor Series, he likely had it in mind that he was going to get kicked out.

The former WWE star was let go from the organization after sexual assault accusations, but he wasn’t going to go down without some theatrics. Even for an organization known for theatrics, the WWE wasn’t having any of this. After Amore had his song chanted by the crowd briefly, the former wrestler was wrestled straight out of the arena.

Enzo Amore in the crowd in a VERY BAD disguise in the second row. I'm sure he didn't mean to get on the side the hard camera faces AT ALL pic.twitter.com/SAKZJGPr0K

Enzo Amore being ejected from the building! #SurvivorSeries

Apparently Amore was disguised when he entered the arena, and then came out from under his veil to surprise the crowd. According to Arash Markazi, this stunt was genuinely unplanned.

I’m told Enzo Amore showing up to Survivor Series, making a scene at ringside and getting kicked out as soon as he was spotted by WWE officials is not part of a storyline in case anyone was wondering. It would be odd if it were considering it wasn’t even shown on the network.