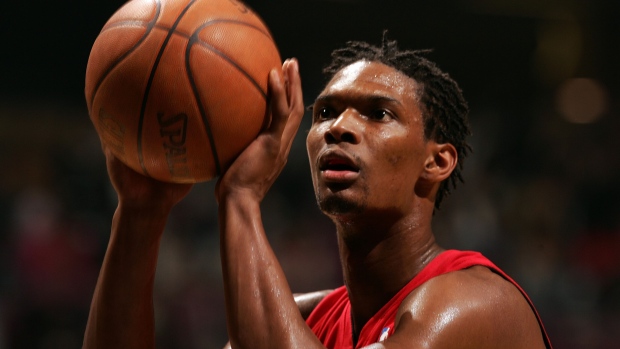 As the Miami Heat and Chris Bosh officially part ways, it has been announced that Chris Bosh will have his jersey retired by the team.

To Raptors fans, this may seem a little odd.

No doubt, part of the reason the team is choosing to retire is the way he’s gone out. Bosh has had issues with blood clots over the past couple years that have only allowed him to play 97 games over the last three seasons (None this past year). Still, he did go to four straight championships with the team and won two of them.

So, this begs the question, should his number be retired as a Raptor as well? Here are four reasons why.

Despite recently getting passed by DeMar DeRozan for first all-time in Raptors games played and points scored, he still sits near or at the top of many of the Franchise’s record books. He’s second in points, first in rebounds and first in blocks.

While Chris Bosh didn’t have the playoff success that the most recent Raptors teams have had, he has an argument for the franchise’s greatest ever player. PER is one of the most all-encompassing stats in basketball and he ranks at the top in any single season and has four of the top ten seasons in PER. Similarly, he’s far and away the team’s leader in win shares.

It’s not his fault the organization wasn’t able to build a competitive team around him.

They Have No Retired Numbers

Break the ice already. At this point, we assume Vince Carter is going to go up in the Raptors rafters, but for the fans who still have mixed feelings about Carter’s departure, maybe Bosh’s jersey can ease the blow.

Chris Bosh was always a positive presence in the Toronto community. When he signed his three-year extension with the team in 2006, he also announced that he would be donating $1,000,000 to a Toronto charity, known as Community Legacy Programs. He left on a positive note as well, as the Raptors were able to get two first-round picks out of his departure and he had many kind words to say about the city upon leaving.

His humorous videos promoting his all-star campaign also did a great job endearing him with the fans.

We’re not sure if it will ever happen, but if Chris Bosh was to get his jersey retired in Toronto, those are four reasons why.

Do you think he should have his jersey retired?