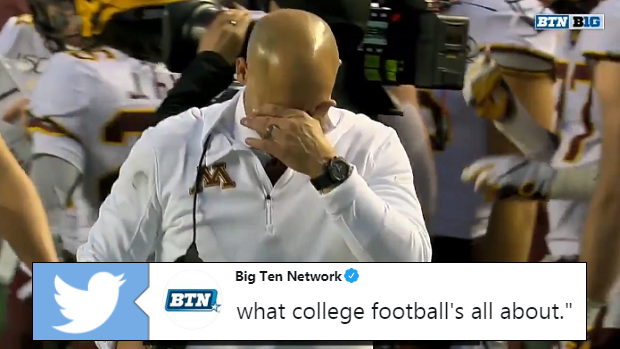 Some stories just warm up the heart.

Casey O’Brien is the talk of the sports world after debuting as Minnesota’s placekicker following four separate stints with cancer. O’Brien helped the Golden Gophers run over Rutgers on Saturday with a 42-7 win, but it became clear that this contest was about far more than just football.

Early in the fourth quarter, the red shirt sophomore entered the game and held the extra point after a touchdown helped Minnesota take a 28-0 lead. Players celebrated with O’Brien after the kick went through the uprights, but the most emotional moment came when O’Brien hugged it out with coach P.J. Fleck. It was a truly special moment.

"That's what college football's all about."

It was perfect, and so was everyone's reaction. pic.twitter.com/mnaGvgsErF

Per the Star Tribune, O’Brien underwent 14 separate surgeries but continued to play football. He was first diagnosed at the age of 13 and suffered from Ostepsarcoma, a rare bone cancer. Coach Fleck touched on O’Brien’s debut and described him as an “unbelievable person”.

"When you think courage, you think Casey O'Brien."

"Nobody can ever take away that he played college football in the Big Ten." pic.twitter.com/qZrVlJZ4s4

O’Brien also held the Golden Gophers’ next extra point to put them ahead 35-0. Congratulations to Casey on a truly remarkable showing, what story.