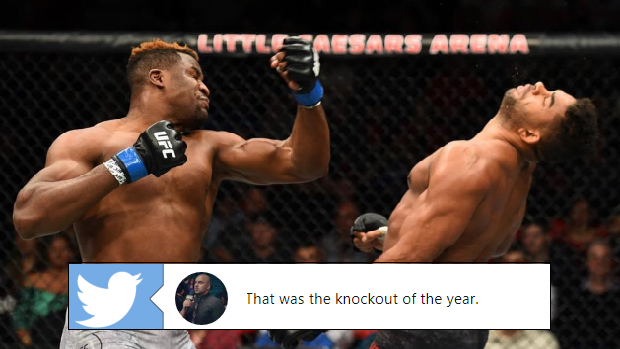 MMA fighter Francis Ngannou put himself on every UFC fan’s map last night after his incredible performance at UFC 218.

In his fight against Alistair Overeem, Ngannou ended the contest after he dodged a punch and hit his opponent with a vicious left uppercut. After the punch, Overeem lay on the floor unconscious.

It doesn’t get much harder than that.

Fans were concerned with Overeem’s health, but he was quick to let the MMA world know that he was okay afterwards in a tweet. He also made sure to congratulate his opponent in the process.

No damage and all healthy thankfully.. unfortunately lost today. Props to @francis_ngannou, I got hit with a uppercut from he**, one of his specialities which we new were very dangerous. Some chill time now before back to the drawing-board 🙏🏽

Following the fight, the UFC world took to the internet to comment on the punch heard around the world.

Francis NGannou defeats Alistair Overeem via first round knock out which looked like this x 1,000,000. #UFC218 pic.twitter.com/NOFqwPpXo8

A little more than 4 years ago, Francis Ngannou had never heard of MMA, and today he is legit the most terrifying man in the sport. What an unreal story.

I'm calling it now. That was the knockout of the year. Take a bow @francis_ngannou. #UFC218
📷 @ufc pic.twitter.com/8SFxYiiPA5

Ngannou, 31, entered UFC 218 as the No. 9-ranked fighter according to USA TODAY Sports/MMAjunkie’s MMA heavyweight rankings. When asked when he would like to fight the number-one ranked Stipe Miocic, Ngannou didn’t hold back.

The following is an excerpt from For The Win

“As soon as possible. I’m injury-free, so I’m ready to go. I’ve been out a long time- like 10 months, and now I want to fight again.

Where does the punch rank among the ones you’ve seen in the UFC?