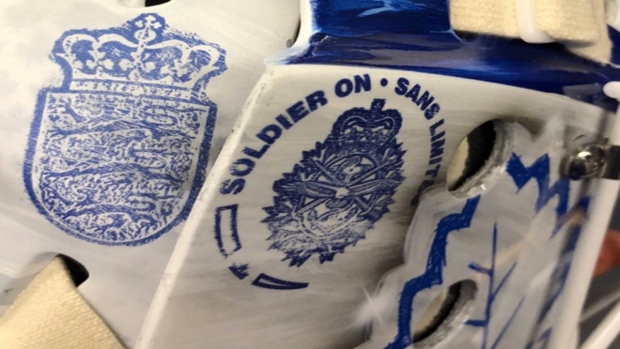 The Toronto Maple Leafs will participate in their third outdoor game in franchise history early next month when they visit the Washington Capitals at the Navy-Marine Corps Memorial Stadium in Annapolis, Maryland.

Like every other outdoor game in the past, both the Maple Leafs and the Capitals will wear special uniforms when they take the ice for their Stadium Series matchup.

The @mapleleafs have officially unveiled their #StadiumSeries jerseys. #MapleLeafs . Thoughts on the white gloves and pants? . (📸 Via: @mapleleafs)

The @mapleleafs have officially unveiled their #StadiumSeries jerseys. #MapleLeafs . Thoughts on the white gloves and pants? . (📸 Via: @mapleleafs)

Since both teams will be rocking different uniforms for the game, it calls for some new masks for the goalies.

On Monday, Maple Leafs goalie Frederik Andersen unveiled the mask he'll be rocking on March 3 and it's very sharp.

The mask was designed by famous NHL mask artist David Gunnarsson and it's one of the sharpest masks Andersen has rocked since joining the Maple Leafs.

Andersen is currently enjoying one of the best seasons of his career as he owns a 32-16-4 record to go along with a .922 save percentage and a 2.67 goals against average in 53 games.