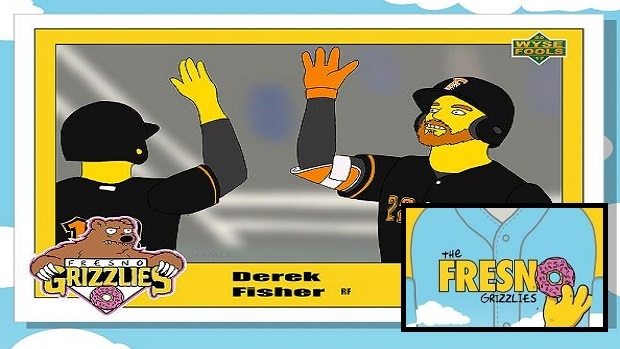 The Houston Astros’ Triple-A affiliate, the Fresno Grizzlies, will host one of the best promotions of the year later this week.

This Thursday, the Grizzlies will host a Tribute to Springfield Night at the ballpark when they close out a three-game series against the Albuquerque Isotopes.

The #TributeToSpringfield cap to be worn on the field by the team on Thursday will only be available in the team store. Limited quantity! pic.twitter.com/4GcU1rEBqP

As part of the promotion, the team will pay tribute to Springfield by rocking some custom jerseys inspired by The Simpsons, which includes Homer Simpson’s hand reaching for a donut on the front of the jersey.

On top of the awesome uniforms the players will be rocking, the first 1,000 fans to enter the ballpark will receive a voucher for a free dozen donuts from Krispy Kreme.

But the best part of the entire night has to be The Simpsons-inspired card set that the first 1,500 fans in attendance will receive.

🚨GIVEAWAY ALERT🚨 First 1,500 fans to this Thursday's game vs. @abqtopes get this #TributeToSpringfield card set. It's funny. Get your tickets at bit.ly/FGSpringfield / FresnoGrizzlies.com or the Grizzlies box office. #Growlifornia

If you’re a big fan of The Simpsons and also love baseball then this is the event for you.