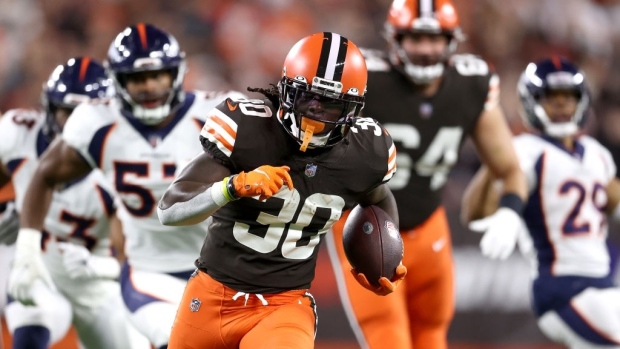 If you caught this week’s Thursday Night Football matchup between the Denver Broncos and the Cleveland Browns, then you probably noticed there was a stand-out star who definitely will have football fans knowing his name.

Though his story is absolutely remarkable and will make you fall in love with him.

Playing at the University of South Florida and putting up record numbers, Johnson went undrafted in 2018 and was invited out to New Orleans Saint training camp, where he went unsigned. Johnson then spent the rest of the year working on a fishing boat.

Johnson continued to try and make his football dreams come true and he reached out to various teams within the Alliance of American Football ahead of its inaugural season in 2019, hoping to land a tryout where he ended up being signed to the Orlando Apollos.

My favorite story about D’Ernest.

He DM’d every AAF team in 2018 asking for a tryout. Made the Orlando team. Then popped off.

Kid has worked his ass off. He’s earned this.

(Of course I saved the screenshot.) pic.twitter.com/015PmctLcc

Following the fall of the AAF after that season, Johnson signed with the Browns in 2019 and made the team’s 53-man roster.

How incredible is that?! Within three years, Johnson went from fishing mahi-mahi to having his first-career NFL start where he put on an absolute show with 22 carries, 146 rushing yards, 22 receiving yards and of course his first career touchdown.

5 teams have yet to have 1 RB do so in a game this season.

Five plays. And just like that the @Browns take the lead! #Browns

"It's a dream come true to be able to play this game and just come out here and be able to start." 💪

With the @Browns dealing with RB injuries, @DernestJohnson2 was given the chance to step up. He delivered 🔥. (@ErinAndrews) pic.twitter.com/oAOnWn0Vli

D’ Ernest Johnson on 1 tonight!! Love to see it! #Browns

There’s truly no better fit for the underdog than to be a part of the Cleveland Browns squad, who are currently 4-3-0 and will take on their division rivals, the Pittsburgh Steelers on Halloween for Week 8!

My life has always been about The Slow Grind 🐢™️

Here is my story. #DawgPound