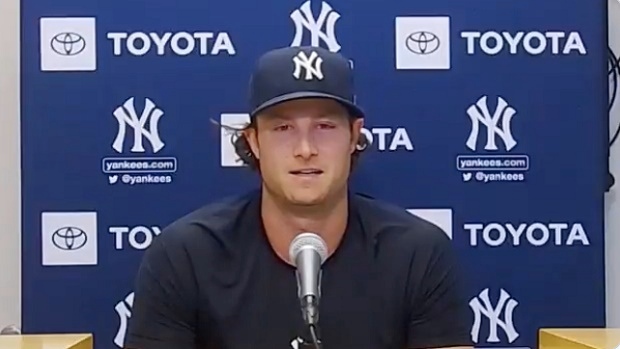 If you’ve been following the endless saga that is alleged cheating in the MLB, then you know the most recent thing that the league is keen upon cracking down on is major league pitchers’ use of sticky substances on balls.

In a recent article by Sports Illustrated, Stephanie Apstein and Alex Prewitt explored the phenomenon and estimated that 80%-90% of pitchers are using some foms of glue or adhesive in order to increase the movement and spin on their pitches.

While some are shrugging this off as part of the modern game, others are certain it’s cheating.

What do pitchers think, you might ask? They’re, uummm……not sure.

Gerrit Cole is one of the MLB’s best pitchers, and he’s often noted for being thoughtful and well spoken. Unfortunately, he didn’t quite look the well spoken part this afternoon. Today, Cole was asked if he’s ever used Spider Tack, which is one of the aforementioned sticky substances, and his answer couldn’t have been more awkward.

Gerrit Cole on if he ever used Spider Tack while pitching:

"I don't quite know how to answer that, to be honest...If MLB wants to legislate some more stuff, that's a conversation that we can have" pic.twitter.com/2fR1AUeOQX

It remains to be seen whether or not the MLB will really start cracking down on this sort of thing, but based upon that answer, they probably have a lot left to do.